4 Great Reasons to Watch Awards Shows With Your Kids 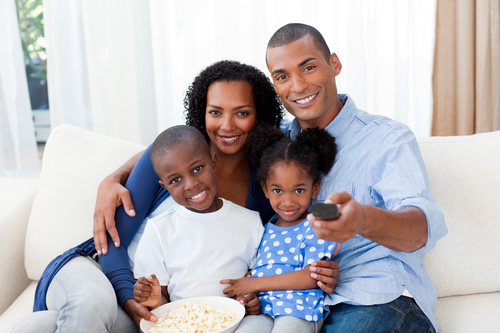 They can be cheesy and focused too much on fashion and gossip and they will never be lauded for their ability to raise our IQ scores, but there is still something appealing about watching awards shows.
Actually, if you think about it, there are positive life lessons you can teach your kids when tuning into the Oscars, Miss America and the Tony Awards. Check out the following four reasons why you should turn awards shows into a TV watching event at home:

Lesson One: The Camera Sees All

It’s pretty common to see celebs doing silly and embarrassing things during awards shows, such as making weird faces or yawning during acceptance speeches. Point out to your child that the camera is catching all of these less-than-lovely moments, which means millions of people are seeing them, too.
Remind them that when they are out in public, they might get caught doing something less-than-appealing by someone else’s smartphone or tablet, and that they should be sure they are acting appropriately at all times.

You will probably see at least one star who is completely thrown off guard by his or her win during the awards. This actress or singer will stumble on stage and mutter a few random sentences, instead of delivering a well-rehearsed speech.
Although it can be hard to watch celebs struggling to speak at a mike, use these uncomfortable moments to remind your child of the importance of being prepared and ready for whatever life throws at them. For example, even if they don’t anticipate a test in science class, they should still have their homework done and be ready for a pop quiz.

Lesson Three: There Is a lot of Culture in Theater

If you are watching the Tony Awards with your kiddos, some of the plays and musicals like “Hamilton” and “The Color Purple” might be unfamiliar to them. However, you can still use what they are seeing on TV as a way to educate them about the rich culture that live theater provides. If they like a dance number or song, look up the show online and learn more about the composer and performers.
Some of their beloved childhood stories may end up being Broadway shows, too. If you are planning a trip to New York City or live nearby, consider introducing your children to kid-friendly productions like “Matilda the Musical” to get them excited about the theater.

As you and your kids watch the endless parade of glamorous actors and actresses file into the auditorium, remind them that many of these performers do a lot more than appear in movies and plays. Super Hero You has compiled a great list of celebs who are known for more than hanging out in Hollywood. For example, Steve Buscemi is a former firefighter from New York City who returned to the Big Apple after 9/11 to help save lives.
As you watch the shows, take note of who your kids like and do some research on them. Then discuss the positive things these people do in their spare time and how they can help people, too.