When Calls The Heart - Change Of Heart 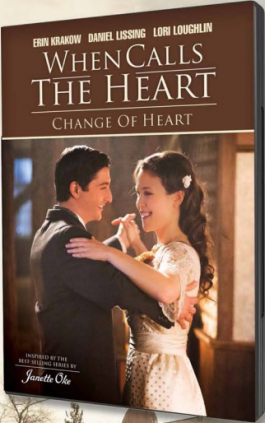 Jack finally gets Elizabeth to agree to join him for a dinner date just as Elizabeth's young sister, Julie Thatcher, arrives in Coal Valley, surprising Elizabeth. Julie is accompanied by Mountie Patrick O'Reilly, the man who has been sent to inform Jack of his new posting, and become the new Constable of Coal Valley. Jack had already forgotten that he sent in a request to transfer the week he arrived in Coal Valley, and the news takes him by surprise.

As Jack is making his way towards his new posting, he crosses paths with some fellow Mounties who are on the hunt for the infamous Tolliver Gang, who are currently scouring the countryside in an attempt to reunite with Nate. Meanwhile, Nate Tolliver is recovering at Abigail's and continues to charm Julie, claiming that he is going to abandon his life of crime for her.

Abigail continues to aide Jack's investigation of the mine disaster by stealing a file from Gowen's office. Patrick visits Abigail's to offer her assistance in Nate's recovery, he instantly recognizes Nate and sends for reinforcements. Later that evening, Gowen discovers Abigail has stolen his file with damning evidence against him, and threatens Abigail saying that exposing him would also tarnish the memory of her late husband.

The latest in the When Calls The Heart saga!